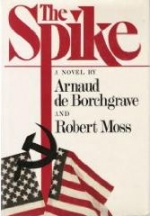 The greatest assistance in disinformation – especially during the current Administration – is always forthcoming from the Reader's Digest. In 1977 the Times exposed Digest editor John Barron as having worked hand in glove with the CIA on a book about the KGB. Other fraudulent journalists like Robert Moss, Arnaud de Borchgrave, Daniel James, Claire Sterling, and Michael Ledeen, among others, seem to pick up disinformation themes almost automatically. In fact, coordination between the development of propaganda and disinformation themes by the covert media assets, the overt propaganda machine, and the bevy of puppet journalists is quite calculated. A theme which is floated on one level – a feature item on VOA about Cuba for example – will appear within record time as a lead article in Reader's Digest, or a feature in a Heritage Foundation report, or a series of "exposes" by Moss and de Borchgrave or Daniel James in some reactionary tabloid like Human Events or the Washington Times or Inquirer. Then they will be called to testify by Senator Denton's Subcommittee on Security and Terrorism, repeating one another's allegations as "expert witnesses".
After that they are given credibility by the "respectable" Cold War publications like the National Review, Commentary, and the New Republic. And finally, since they have repeated the theme so many times it must be true, they are given the opportunity to write Op Ed pieces for the New York Times or the Washington Post.[13]