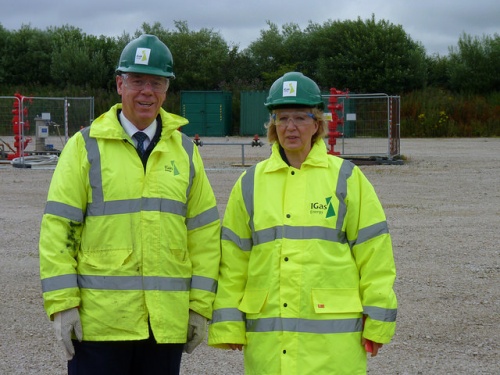 In July 2018 incoming prime minister Boris Johnson appointed her business and energy secretary with responsibility for the onshore oil and gas industry. She replaces Greg Clark, who quit the role upon Johnson's leadership victory.

Leadsom, a prominent and outspoken member of the Leave campaign for Brexit during the 2016 EU referendum, was previously Leader of the House of Commons from June 2017 until May 2019. Before this, she was secretary of state for environment, food and rural affairs, appointed by incoming PM Theresa May on 14 July 2016. [2]

Leadsom first entered government as economic secretary to the HM Treasury in April 2014 as part of a reshuffle prompted by the resignation of Maria Miller from the cabinet.[3] She was then appointed a minister of state at the Department for Energy and Climate Change, following the 2015 general election.

Leadsom has twice unsuccessfully run for leadership of the Conservative Party, in 2015 and 2019.

As business secretary, Leadsom will be the sole shareholder of the industry regulator Oil and Gas Authority (OGA).

Before entering politics Leadsom worked in the banking and finance industry for 25 years. Her most recent role was head of corporate governance and senior investment officer at Invesco Perpetual. [3]

From 1997-99 Leadsom was managing director of De Putron Fund Management. She then became a senior investment officer at Invesco Perpetual from 1999 until 2009.[4]

{{#ev:youtube|https://youtu.be/C2Fa5KIGBvc%7C500%7Cright%7CAndrea Leadsom visiting the IGas site in Doe Green, 6 August 2015}} Leadsom has been one of fracking's most ardent advocates. In a May 2016 article in the Yorkshire Post she wrote:

'We need a system fit for the 21st century, replacing coal with gas, nuclear, and renewables, and fracking is a key part of those plans. A shale gas industry will not only boost our economy and create thousands of jobs across the supply chain – it will help to guarantee a secure energy supply which is an absolute must for this government [...] I really believe that this is an opportunity we can’t afford to miss.' [5]

Leadsom has also been quick to reduce arguments against shale gas to 'scaremongering'. In an interview with PoliticsHome in 2016, Leadsom said:

'There’s the ridiculous argument that somehow we don’t need gas, we can just do it with wind farms and solar. Of course that’s absolutely implausible. [...] Don’t be browbeaten by very scaremongering accusations into failing to take a decision or making a negative decision.' [6]

In November 2016, leaked e-mails revealed Leadsom had colluded with other ministers to delay the release a report which was critical of fracking until after Cuadrilla's application to frack in Lancashire was decided. A heavily redacted version of the report was originally released in 2014, which the government said was not'robust' enough to influence policy. The full report is critical of fracking and suggests the industry would negatively affect the tourism, congestion, housing and noise pollution of rural economies. [9]

Taking away local decision-making on fracking

Question tabled in Parliament by Lee Rowley Conservative MP for North East Derbyshire regarding INEOS's 'non-determination complaint' to the government over delays by Derbyshire County Council's over the company's shale gas applications in the region:

"Following the recent experience in my constituency where a planning application for exploratory drilling that will lead to fracking has been declared for non-determination in a highly premature manner, may we have a debate in Government time about whether the planning system is working for these kinds of large applications?)

:Reply by Andrea Leadsom, Conservative, South Northamptonshire, Leader of the House of Commons

My hon. Friend is a strong voice for his constituents, and he is right to raise this matter. An applicant for planning permission can exercise powers under section 78 of the Town and Country Planning Act 1990 for a right of appeal to the Secretary of State against a decision to refuse consent, or non-determination. Whether an applicant wishes to exercise that right of appeal is a matter for them. He will appreciate that major shale gas planning decisions will be the responsibility of the national planning regime, so he could raise this with Department for Communities and Local Government Ministers during questions on 22 January.

Leadsom has voted against any increased regulation on fracking. [10]

Using data gathered by the Washington-based organisation the International Consortium of Investigative Journalists, a July 2014 report by The Guardian found that Peter de Putron - brother-in-law of Andrea Leadsom and founder of De Putron Fund Management - had donated £816,000 to the Conservative Party since 2010, and £680,000 to the Open Europe think tank since its foundation in 2005.[11] The donations to both the Conservatives and to Open Europe were channelled through the company Gloucester Research (now called G-Research), at which Andrea’s husband, Ben Leadsom, is a director.[11]

The Fresh Start Project is a parliamentary grouping of Conservative MPs concerned by EU issues, and the All-Party Parliamentary Group for European Reform. It was co-founded in October 2011 by Leadsom and George Eustice MP, ex-CEO of Business for Sterling.[12] According to the minutes of their meetings, the group bases their discussions on the right wing think tank Open Europe's reports.[13]

The APPG for European Reform was founded at a similar time to the Fresh Start Project, holding its inaugural meeting on 10 November 2011.[14] At this meeting, Leadsom was elected co-chair of the group, and Eustice an officer. Open Europe was instituted as secretariat to the group, giving them very close proximity to MPs.

Leadsom’s connections to Open Europe, however, predate her involvement in the founding of the APPG and the Fresh Start Project.

Special advisers during her time as Defra minister