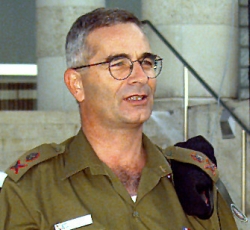 Amos Malka was head of Israel's military intelligence organisation Aman from 1998 to the end of 2001.[1]

Malka told Akiva Eldar that during his tenure, Military Intelligence rejected the theory that Yasser Arafat was not a partner for peace:

"We assumed that it is possible to reach an agreement with Arafat under the following conditions: a Palestinian state with Jerusalem as its capital and sovereignty on the Temple Mount; 97 percent of the West Bank plus exchanges of territory in the ratio of 1:1 with respect to the remaining territory; some kind of formula that includes the acknowledgement of Israel's responsibility for the refugee problem and a willingness to accept 20,000-30,000 refugees. All along the way ... it was MI's assessment that he had to get some kind of statement that would not depict him as having relinquished this, but would be prepared for a very limited implementation."[2]

Malka is an Adjunct Senior Fellow of the Institute for Policy and Strategy at the IDC Herzliya.[3]