Difference between revisions of "Guy Newey" 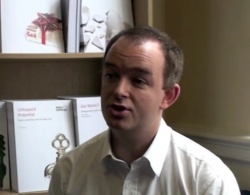 Guy Newey was appointed special adviser to secretary of state for business, energy and industrial strategy Greg Clark in August 2016. [1] He previously was special adviser to Amber Rudd at the Department for Energy and Climate change from July 2015 to July 2016. [2]

Newey is the former head of policy at energy supplier Ovo Energy and previously worked for four years at the right-wing think tank Policy Exchange as its head of environment and energy.